The video surveillance of thoroughfares in this large country improves the road safety and service. The Russian standards for road video surveillance equipment are very high, and the products made by Videotec, Italy, fully comply with them. 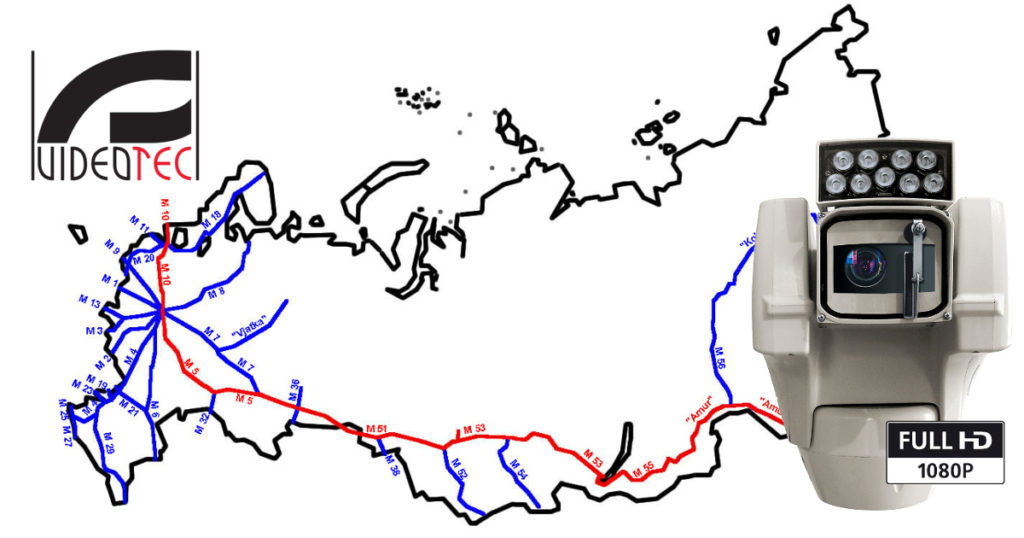 Videotec CCTV On the Roads of the Two Russian Capitals

Various Videotec CCTV cameras that are an important part of intelligent transport systems can be found on many roads in the two Russian capitals. The Third Ring Road in Moscow and the Western High-Speed Diameter in St. Petersburg are the most prominent projects among the video surveillance and traffic monitoring projects using Videotec equipment.

In December 2016, the 11.7km Central High-Speed Section of the Western High-Speed Diameter between the north and the south of St. Petersburg was opened, including three bridges, a road interchange and a road tunnel.

72 ULISSE COMPACT HD cameras with the WASPT washing system were selected for video monitoring. These robust, rotating Full HD cameras, that are totally controllable at -4°C/+6°C, have a 30x zoom lens, a frame rate of 60 images per second and programmable presets, have already become video surveillance bestsellers for the Russian roads. Any model of the series has several power supply options – 230/24/120 VAC can include an IR illuminator and is compatible with various ONVIF-S VMS and control software.

WASPT, an exclusive washing system for the windows of PTZ cameras and housings, includes a wiper, a 5l or 23l washing tank and an activation setting used to remove any dirt or suspended matter from the windows. The system’s software analyses how dirty the glass is and triggers the wiper, therefore, the system needs maintenance a couple of times a year only.

From Moscow to Khabarovsk in the Far East

200 ULISSE COMPACT PTZ cameras will soon monitor the traffic on the Central Ring Road of the Moscow Region. As soon as this road with a total length of over 520km and a speed of 120km/h is built, the Moscow Ring Road and roads in the Moscow Region will become less busy, and the transit traffic of heavy trucks will be redistributed.

ULISSE COMPACT HD cameras with the WASPT washing system are already on watch on the M-4 Don Road (the road bypassing Novaya Usman, km 517  km 544) in the Voronezh Region.

Similar to the Moscow projects, fixed cameras protected with HEG housings are used there along with PTZ cameras to detect any incidents. 9 HEG housings with a large camera and/or large lens inside, the windows being served by wipers and washing system, are used within this road section. Such a housing is an aluminium IP66/IP67 housing that has a double heater and ensures that the camera is able to operate at -5°C/+6°C.

Similar equipment, i.e. 21°COMPACT HD PTZ cameras and 22 HEG temperature-proof housings with wipers are installed on a section of the M-9 Baltiya Road and on the M-3 Ukraine Road (28 cameras and 14 housings). 47 ULISSE COMPACT HD sets with a parapet bracket and a 5l washing tank, and 45 HEG housings are expected to be used on the road bypassing Khabarovsk, km 13  km 42, starting from 2017. 91 more ULISSE cameras are expected to be installed soon on section km 1092  km 1319 of the M-4 Don Road.

Along Tunnels and Bridges

The video surveillance equipment installed on bridges and in tunnels, especially in maritime regions, is to be protected as much as possible. Videotec stainless steel housings designed for long-term use in a corrosive environment are usually preferred for such projects.

For example, 32 NXM housings with VIPNX wipers are going to be installed to protect the cameras on one of the large bridges under construction in Russia. The solution is unique because both the housing and the wiper are made of electropolished AISI 316L stainless steel, are IP66/IP67/IP68 and corrosion- and heat-resistant.

The housing can have 1 or 2 heaters for the camera to operate at temperatures down to -4°C, a power supply and a washer pump having a solenoid valve and a stainless steel casing. To prevent dust from depositing on the window, the housing can be equipped with a flange designed to create an air barrier in front of the glass by supplying clean air from the compressor.

An NXM mounted on an NXPTH rotating platform forms a complete positioning system that is successfully used in marine, industrial and chemical environments in various countries. NXM housings protect the video surveillance cameras on the steel Jacques Cartier Bridge in Canada (3.5km) that is the 3rd busiest bridge in the country. This housing series was also used to protect the cameras in the Imam Ali road tunnel in Tehran where the equipment operates in the most severe conditions because of heavy traffic, acidic substances and corrosive environment.